Zeno's Conscience by Italo Svevo (1861-1928): A satirical critique of Freudian psychoanalysis.  A novel about a man who inherits his father's business and who is a well-intentioned liar and a self-interested hypochondriac, chronically smoking "L.C.s" (last cigarette) and fantasizing about - sometimes chasing after - youthful, "healthy" women who are not his wife.  The novel is written as Zeno's reflection on certain endeavors in his life and as a counter assessment of his psychoanalyst's conclusion that he suffers from an Oedipal Complex. 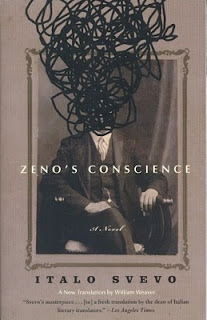 so good.  the novel moves through a series of foolish acts and hindsight and compromised ideals.  zeno's character writes about his life in his old age and focuses primarily on 2 questions: 1) whether or not he can achieve health, and 2) whether or not he is a good person.  he is plagued by sharp pains that cause him to limp and he collects and abuses prescriptions, diagnosed with a new ailment each month.  he lies to everyone he meets, cheats on his wife, gambles, neglects his children.  blah, blah, whatever.  the great part is that finally zeno concludes that the questions of health and goodness are frivolous and that mankind is the sickest species in that he has become consumed by his preemptive prescriptive antidotes to natural circumstances that ought to be experienced, endured, and overcome.  the implied critique of western medicine (and especially psychoanalysis) is fairly obvious, but the critique of our ethics is more subtle and INTERESTING.  zeno concludes that we are not anything, we are neither good nor bad, nor are we anything else.  rather, goodness is a guiding light that occasionally illuminates our thoughts and actions - it fades and flickers in accord with nature and convenience, yet we attribute its presence to our character.  oh, oh, oh, i just love this shit.

and i have to include a few badass excerpts from zeno's conscience:

I forgive the Doctor for seeing life itself as a manifestation of sickness.  Life does resemble sickness a bit, as it proceeds by crises and lyses, and has daily improvements and setbacks.  Unlike other sicknesses, life is always fatal.  It doesn't tolerate therapies.  It would be like stopping holes that we have in our bodies, believing them wounds.  We would die of strangulation in the moment we were treated.  (p. 435)

When the swallow learned that for her no other life was possible except migration, she strengthened the muscle that moves her wings, and it then became the most substantial part of her organism... But bespectacled man, on the contrary, invents devices outside his body... Devices are bought, sold, and stolen, and man becomes increasingly shrewd and weaker.  His first devices seem extensions of his arm and could not be effective without its strength; but, by now, the device no longer has any relation to the limb.  And it is the device that creates sickness, abandoning the law that was, on all earth, the creator.  The law of the strongest vanished and we lost healthful selection.  (p. 436)
Posted by R at 10:14 PM