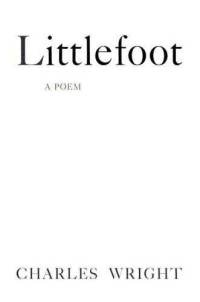 Littlefoot by charles wright: a poem in 35 parts, as a novel in chapters.  a man reflects on his life as reflected in the landscapes surrounding him.  consciousness merges with nature and the history of a life becomes a collage of moonlight, windtorn blades of grass, ravens in flight, feathers, dead branches, ashen clouds, and the way the light falls upon a deer's back.  written beautifully, soft and reflective, but also sad in its remoteness.  meditatively pacifying, the poem casts a holiness over every perceivable moment.  nature imagery is coupled with commentary on memory, love, life, death, art, poetry, knowledge and faith.  Littlefoot suggests to me a metaphysics directed by the natural world, offering a path between the abstract and the concrete.

"We're not here a lot longer than we are here, for sure. / Unlike coal, for instance, or star clots. / Or so we think. / And thus it behooves us all to windrow affection, and spare, / And not be negligent. / So that our hearts end up like diamonds, and not roots. / So that our disregard evaporates / as a part of speech." (part 1, p. 4)

"Fame for a hundred years / is merely an afterlife, / And no friend of ours. / Better to watch the rain fall in the branches of winter trees. / Better to have your mail sent / To someone else in another town, / where frost is whiter than moonlight." (part 14, p. 29)

"Deer huddle like cattle around the salt block, / then burst like flames in the air. / The white clouds slide from the south / Like an edge of ice. / The swallows harangue and arabesque / Over the lawn and lilac rim of the late lilacs, / Then dwindle against the dark green of the evergreens. / Last bird call, sun disappearing / under the right edge of things. / All that I know goes with it, / Isolate, like a body pulled down by weights / into the depths." (part 20, p. 45)

"The little engines of change at work / Unexpectedly in the atmosphere / as well as our lives, / The dragging, black-bellied clouds / That enter our blood from the wrong side of the compass, / The double-clutch of wind-shift / Into off-limits and unappeasable places / Is coming our way soon, / and slow-dropped out of the blue. / One sees it and feels it at the same time, / noiselessly" (part 28, p. 66)

part 35 closes the poem by asking: "Will you miss me, will you miss me, / Will you miss me, / Will you miss me when I'm gone?" addressing the reader pleadingly.  the format changes, the rhyme scheme changes, and it reads as a dying man's last words - a love letter to the world as he knew it, simple and true.  in fact, part 35 strikes me as a paraphrase of parts 1-34 - an overt sentimentalism that did not need stating.  unless wright meant to highlight the conflict between subjective perception and its communicative counterpart (and perhaps he did?), i don't feel that part 35 is necessary to the poem as a whole.  or it may be that i prefer wright's nuanced imagery so strongly that i cannot appreciate the simple, elegiac style that he closes with.  anyway: a beautiful poem and my first experience of wright.
Posted by R at 4:23 PM