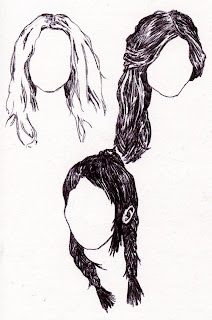 a woman (12 oz. drip coffee with 7 lumps of sugar and a double espresso with 7 lumps of sugar) said to me today that life is too short and I said that I’d rather it be that way than too long – she said to me that she had found the headstone of her stillborn Uncle Ron while walking through a cemetery – she remarked that we all lose one another in different ways - another woman (12 oz. americano with room and a galette aux fruits) said to me that she wished she were inside of a cocoon – a young woman (occasional 16 oz. soy moliere, usually orders a 12 oz. soy chai) said to me that everything happens for a reason and I agreed with the “everything happens” part – I am beginning to memorize the names of the people I make coffee for, memorizing who likes whipped cream, who prefers decaf, who wants no foam, who wants extra foam – so there is a segment of my brain that is filled with faces associated with beverages and treats, and that segment lights up and shines 4-5 times per week – I saw my fifth grade teacher (1 pound of sumatra beans, ground) today and remarked that I had mistaken her for Cindy Crawford at first glance, because I remember her saying in 1998 that Cindy was her long lost identical twin – I remember her saying in 1998 that Cindy’s mole was on her face and that her own mole was on her ring finger, and it was – I was glad that she remembered an essay I had written and the fact that I “never spoke” rather than the fact that I had been the person to infest her class with head lice (they are just headfriends).

I’m thinking of a recent memory, a familiar face, eyebrows slanting, eyes large and open and looking back at me – it’s good to look at one another, it’s good to put a kiss on the nose of a face that you love – a co-worker told me today that “kitten” was the derogatory term for women before it was replaced by “chick” – kittens and chicks are cute, fluffy things that grow claws and talons and beaks – kittens and chicks are things that are enjoyed when they are young and are forgotten or devoured when they grow older and I can’t wait for my claws - call me a kitten anytime you want.
Posted by R at 10:12 PM