on tzvetan todorov's Torture and The War on Terror (2009) 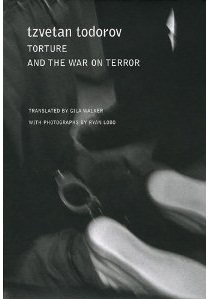 "Torture and the War on Terror" is an essay published in 2009 featuring photography by Ryan Lobo.  I realize that for some, reading this now may seem late, no longer relevant; it is as Hegel said: "One more word about giving instruction as to what the world ought to be. Philosophy in any case always comes on the scene too late to give it... When philosophy paints its gray in gray, then has a shape of life grown old. By philosophy's gray in gray it cannot be rejuvenated but only understood. The owl of Minerva spreads its wings only with the falling of the dusk."  It is important to analyze and understand our present history.

That said, the essay is brief, and an interesting observance of the rhetoric shifts that took place during Bush's presidency.  First, there is the obviously problematic terminology of a "War on Terror" and "Terrorists" as the enemy: a metaphorical war waged against a generic term that can be applied to any person whose actions and beliefs are not state-sanctioned.  There is no universally agreed upon, legally binding definition of terrorism.  How can a war exist when the enemy is undefined and the battlefield is an abstraction?  I do not think that it is an overstatement to call our conduct a recipe for genocide.  The conclusions drawn by Todorov's in this essay terrified me in their accuracy.  Some illuminating facts:

Todorov attests that international relations seem governed less by the idea that 'the end justifies the means' than by the fact that 'the means outweigh the ends,' and that ideas and principles have an underestimated and untapped (in times of war) formidable power.  Is the proposal that we switch our strategy from military strength to adherence to internationally recognized human rights standards and minimal calculated risks naive?  Another question, raised by Todorov, is whether the consequence is worth it - in other words, is legalized terrorism justified by victory?

Also - I was horrified to discover that all of Lobo's photographs featured in the essay were taken at the prison located 9 miles from my house.  They are photographs of male offenders classified as "maximum custody" or "extreme risks to the public."  None of them are terrorism suspects.
Posted by R at 10:40 AM