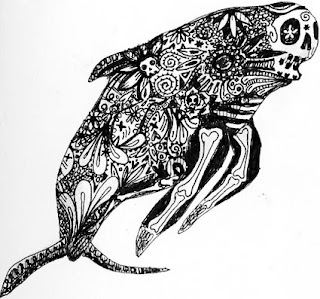 all the information you need:
R.I.P. 30 Pilot Whales

i was dumped last night and so i drank a great deal of beer, bleached my friend's mohawk, and went to the gay 90s in minneapolis and i'm never dancing with straight people again.  unless they are straight people at a gay bar.  straight person on straight person dancing is the grimiest thing i know.  gay on gay dancing and gay on straight  dancing is 100% where it's at, so i'll meet you at the bar.  and guess what?  you can compete for the opportunity to dance in your underwear for money.  that's not boring.  i didn't do that last night, however, because women aren't much in demand on saturday nights.  apparently (i was informed by the bartender) women are for sundays.  my friend stole a decorative miniature pumpkin from the tranny at the coatcheck and put it in my purse, and i think a highlight of the night was being able to yell, "you know how much i care?" before throwing a small pumpkin out the window of my buick on hwy 94.   maybe coincidentally, maybe not coincidentally, 30 pilot whales died last night and washed up onto the shore of donegal beach, rutland island, ireland.  all i'm saying is, don't dump me.
Posted by R at 7:53 PM